In February Surfers Against Sewage SAS ran their biggest Mass Unwrap ever! In total 5,783 items of unnecessary, single-use plastic packaging were removed in stores across the UK. 65% of these were from fruit and vegetables, including the notorious coconut wrapped in clingfilm!

As part of the first-ever Plastic Protest this autumn, we are calling on you to join thousands of environmental activists completing the Less Plastic Please Survey and challenging supermarkets to do their bit and address the issue of avoidable plastic packaging.

From the 5th September to the 18th October ‘The Generation Sea: Plastic Protest’ will see communities take part in six grassroots actions designed to challenge the manufacturers of unnecessary, single-use plastics, change public perception and demand stronger legislation from the government.

Starting on the UK’s beaches, the protest will see a groundswell of actions all aimed at highlighting the irrefutable evidence of the plastic pollution crisis. The series of events will include:

1 | Big SAS Beach Clean: Summit To Sea: From mountain tops to beach fronts and busy streets to flowing rivers, in excess of 600 cleans will take place across the UK mobilising over 35,000 volunteers and removing over 40,000kg of plastic pollution.

3 | Brand Audit: Calling out big brands, over 250 vital datasets will be collected, recording the impacts industry has on the coastline and highlighting the top polluters.

5 | Trash Talk: Supermarkets create an estimated 59 billion pieces of packaging totaling over 800,000 tonnes per year. That is simply not good enough. Ocean activists everywhere will be writing to their MPs and local stores to demand a reduction in plastic.

Complete the survey between the 5th September and 18th October and join the Plastic Protest.

Thanks, everyone & stay safe,

Surfers Against Sewage SAS is a national marine conservation and campaigning charity that inspires, unites and empowers communities to take action to protect oceans, beaches, waves and wildlife. 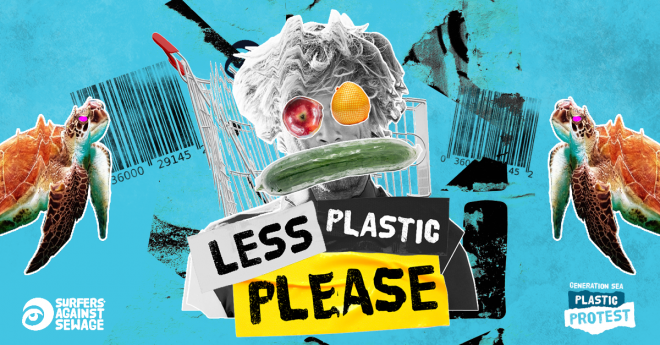